Two years ago, Angelique Kidjo staked out her creative ownership of Royce Hall with a performance that utterly captivated a full house crowd.  On Sunday night, she did it again, this time claiming Disney Hall with a thoroughness that few other artists – Gustavo Dudamel the most recent – have been able to accomplish. 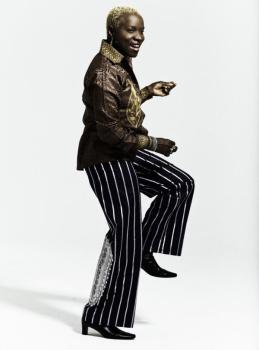 was no surprise to anyone who’d seen her perform live or, in fact, who’d ever experienced her similarly exuberant recordings.  And a majority of the packed house at Disney clearly seemed primed to anticipate, and enjoy, the non-stop energy of her singing, dancing and – in the program’s climactic phase – her sharing of the stage with her listeners.

Working at the center of a half circle formed by her four back-up musicians – guitarist Dominic James, bassist Andre Manga, percussionist Ibrahim Diagne and drummer Daniel Freedman – Kidjo was a study in motion.  Not a single number passed without a vigorous display of her dance moves, which were eclectic combinations of the traditional styles of her native Benin, hip-hop and modern dance.  Between numbers, she talked about her childhood and her life, about peace and brotherhood, while continuously urging her listeners to get up and let the music move their bodies.

For the first two thirds of the program, it seemed unlikely that would happen.  Disney Hall, by its very layout, does not immediately present itself as a friendly place for crowds to gather in the aisles and at the stage.  Even so, Kidjo’s singing – with its articulate, declamatory style – filled the room with songs reaching from “Atcha Houn,” the first song she sang on stage as a child to “Petite Fleur,” the Sidney Bechet song that was a favorite of her father, “Mbube,” the original inspiration for “The Lion Sleeps Tonight,” and the Ghanian high life, “Kelele.”

But it wasn’t until she persuaded the crowd to join in the singing of “Afrika” with her, and stepped off stage and through the aisles that the program began to ascend toward its peak.  When she then urged listeners to join her onstage with the singing of “Tumba,” she was soon surrounded.  A spontaneous dance program followed, with individual audience members displaying their unique skills, interacting with Kidjo and percussionist Diagne.

The process was similar to what had taken place at the Royce Hall concert.  But the experience was different, more extraordinary in the formal, even cloistered setting of Disney – an experience to remember.  And one suspects that no one could have done it with the verve, the panache and the sheer sense of joy in music-making and entertaining that the inimitable Anglique Kidjo brought to this remarkable evening.