The combination of Al Jarreau and Dee Dee Bridgewater, performing at Disney Hall Sunday night on the same stage was an inspired booking.  One could make a good case for the event as a rare display of brilliant jazz singing at the highest level.  The only missing element, in fact, was the failure to allow time for at least a single spontaneous musical pairing by these two extraordinary artists. 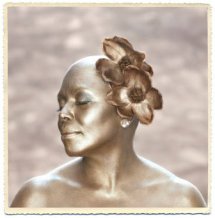 Bridgewater’s set was based on material from her new CD, Eleanora Fagan (1915-1959): To Billie With Love From Dee Dee, a tribute to Billie Holiday.  Both the CD and the performance differed dramatically from Bridgewater’s theatrical production of the late ‘80s, Lady Day, based on Holiday’s autobiography, Lady Sings the Blues.  Rather than position the tribute in the atmosphere and the setting of the originals, Bridgewater chose the path of bringing her own unique artistry to the Holiday classics, enhanced by the supportive arrangements of pianist Edsel Gomez.

Her opening numbers, “Lady Sings the Blues” and “Lover Man” immediately announced her intentions.  Alternating intimate, soft-spoken lines with segments of high energy intensity, Bridgewater stamped the songs with a personal imprimatur, as Holiday had done decades earlier.  “Don’t Explain,” less outgoing, found a darker expressiveness, enhanced by the background flute work of Craig Handy.  On “A Foggy Day,” she displayed her impressive scat singing abilities, delivered with the sort of authenticity that too often eludes vocalists who attempt this deceptively challenging art.

The elegantly graceful, stunningly gorgeous Bridgewater prowled the stage on virtually every number, reaching out to the sometimes neglected listeners in the rear stage area, joking with her listeners, clearly enjoying her complete immersion in the music.  Charging through an exuberant scat exchange with drummer Greg Hutchinson, she coyly flirted with bassist Ira Coleman during a bass and voice version of the early Holiday tune, “My Mother-in-Law’s Son.” and finished he program with a mesmerizing reading of “Strange Fruit.”

In most of the numbers, Handy – on tenor and soprano saxophones – was a close partner, deeply involved in the same sort of musical marriage that often took place between Holiday and Lester Young.  But the only problems in this otherwise superlative set arose when his intensity – exaggerated by the overamplification of his horns and his tendency to play in the same pitch range inhabited by Bridgewater – tended to narrow the emotional range of the interpretations. 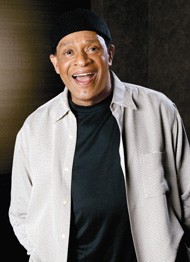 Jarreau, as he sometimes does, took a while to warm up to his surroundings.  His performing style is, by nature, gregarious, and he spent the first few numbers finding his way musically, chatting with the audience, seeking a comfort zone in what is basically a theatre in the round setting.

By the time he got to James Taylor’s “Fire and Rain,” he’d found his groove, displaying his ineffable ability to personalize familiar material.  He followed with a string of equally irresistible interpretations: a buoyant version of the jazz classic, “Better Than Anything”; his characteristically upbeat – and musically challenging – romp through Paul Desmond’s “Take Five”; a deeply touching, story-telling reading of Lennon & McCartney’s “She’s Leaving Home”; and a jazz bossa nova-tinged “Agua de Beber.”

His climactic number – “Roof Garden” – was Jarreau at his hard grooving best.  Taking a simple, repetitive line, underscoring it with a pounding back-beat, enlivening it with his crisp, articulate scat singing, he – and his solid band – brought more meat and potatoes swing to Disney Hall than the venue has experienced in a long time.

At seventy (as of March 12), Jarreau is still at the top of his game – maybe even more than that, given the blend of maturity and musical insight that he brings to every thing he sings.  And the same can be said for Bridgewater, who turns sixty in May.  Together, their performances offered incomparable testimony to the timelessness of music, and to the persistence of its life force in artists who fully embrace its possibilities.