I freely admit to being a folkie at heart.  The first  records I fell in love with were by the Kingston Trio and Peter Paul and Mary, only vaguely aware at the time that the underpinnings to the whole movement were the songs of Leadbelly, Pete Seeger and most significantly, Woody Guthrie. Even as I later filled in my blues education listening to Sonny and Brownie, Cisco Houston and others, Woody seemed an almost mythical figure, with Arlo rising in the late sixties and seventies as a contemporary (to me) figure, separated from his father’s shadow by Woody’s illness, which left him out of Boomers’ eyes in the decade before his passing, and the general eclipse of the folk scene.

Friday night at Royce Hall, UCLA Live presented The Guthrie Family Rides Again, demonstrating the warmth, humor and narrative thread of the Guthrie legacy. Arlo’s son Abe and three daughters, Annie, Kathy and Sarah Lee were at the core of the show, with Sarah Lee and her husband Johnny Irion opening with two country-folk tunes, “Lilacs” and “Kindness,” featuring gentle voices and sweet harmonies, with Irion playing harmonica on the latter.

The first of many songs derived from Woody’s unrecorded lyrics, the appropriately titled “Folk Song” was a lesson in how to construct a folk song. It was a perfect lead–in to the introduction of Kathy Guthrie, who has staked out her own turf (along with Amy Nelson, daughter of Willie) with a group known as Folk Uke, specializing in songs with “inappropriate lyrics.” Delivered, with ukelele accompaniment, in sweet voice and deadpan delivery, her song “Shit” featured the lyrics: Shit makes the flowers grow/I wondered why you were here and now I know. The audience was soon singing along.

Arlo joined the troupe next, his voice rich and his ability to spin a tale strong as ever. He talked about Woody’s ability to recreate folk songs of the thirties and forties in his own image, demonstrating with “Gypsy Dave” and the more well-known “Pretty Boy Floyd.”  Then a third generation, a collection of granddaughters with no visible stage fright – the family had already presented a children’s show to a packed audience of elementary school kids earlier in the day – joined in for three more songs from the Woody archives, including “Every Hundred Years (I wash my face),”  “Show and Tell” and “Daddy’s Shoes.”  In the spirit of his dad’s reconfiguring of folk songs, Arlo then demonstrated how he turned “Me and My Dog” into “Me and My Goose,” culminating in a supper, and read a poem called “Mooses” explaining that the purpose of bedtime stories was to get kids scared to come out from under the covers. 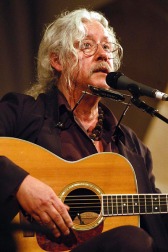 Arlo then proceeded with one of his trademark musical narratives, starting with the numerous requests to conjure up a reminiscence of Woodstock on its 40th Anniversary, which he summarized briefly: “I remember gettin’ there.”  It turned out he remembered a little more, including being pressed into service a day earlier than scheduled when he was in dubious condition to do so. He closed out the first set with a rousing version of “Comin’ Into Los Angeles.”

The second set began with Arlo singing a few songs “without the herd,” relying mainly on his son Abe backing him up on keyboards, and featuring more music culled from the treasure trove of Woody’s archived lyrics. “In Times Like These” was written during WW II, when Woody had shipped out in the Merchant Marines, and the poignant “Mother’s Voice” had been put to music by Janis Ian.  Annie, on vocal and zither,  presented one of her originals, “Lullaby.”

What followed was one of Woody’s most enduring songs, one now so associated with him that we forget it was put to music by Martin Hoffman, a decade after Woody wrote it as a poem. “Deportee (Plane Wreck at Los Gatos)” is Woody’s quietly searing lament about a plane crash in 1948 that killed 28 migrant Mexican farm workers, their individual lives deemed so insignificant that the NewYork Times failed to list any of their names in the obituary.

By this time the near capacity crowd at Royce was thoroughly behind the Guthrie clan. Kathy provided another “inappropriate” number with “Knock Me Up,” which begins “I feel fertile” and continues with “Knock me up if you love me, knock me up if you don’t…”  Let’s just say a good portion of the audience was probably searching their handhelds for some more Folk Uke music on the way home.

Meanwhile, it was time for Arlo to hit some of the familiar bases, switching to piano for a rollicking version of the late, great Steve Goodman’s “City of New Orleans” and closing out (not really) with “This Land Is Your Land”, complete with a story of his mother’s trip to China, where she found a class of Chinese kids singing the song.  Arlo’s ability to stop even the most familiar number (especially the most familiar number) with a rambling story is still a delight,  demonstrated again in an encore version of  “The Motorcycle Song.”  Then the entire 10 person family band, plus assorted grandchildren, returned to send the audience home gently with “My Peace,” words by Woody,  music by Arlo.  Met by a standing ovation by the Royce Hall crowd, there until the very end.

2 thoughts on “Live Music: Arlo Guthrie and the Guthrie Family at Royce Hall”