Anthony Wilson has been a vital member of the Diana Krall quartet for nearly a decade, with all the attendant visibility that accrues from a gig with a major name talent.  But he’s had another career, less high profile, but infinitely rewarding to the Angelenos who have the opportunity to hear his many local performances, in many different settings.

Friday night’s appearance at Vitello’s was an especially appealing display of the length and breadth of Wilson talents that don’t always have the opportunity to be revealed in his big venue Krall outings.  The focus was on the nine piece ensemble he has assembled from time to time over the past thirteen years.  (The original nonet was featured in 1997 on his first album – the Grammy-nominated Anthony Wilson.  A second album, The Power of Nine, was released in 2006.) 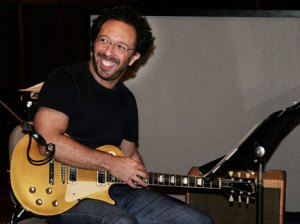 A pair of Joe Zawinul pieces early in the set – “In A Silent Way” and “Walk Tall” – quickly established the range of music to expect for the evening.  And, as the program continued, even more intriguing areas were explored.  Among the many highlights: a surprisingly touching rendering of “Danny Boy” (Wilson introduced it as an “old ballad”) featuring baritone saxophonist Adam Schroeder; an arrangement of Coleman Hawkins’ “Rosita” with a stylish harmony line between tenor saxophonist Matt Otto and trombonist Alan Ferber that wound up in a driving, Swing style groove; Wilson’s own “Power of Nine,” a minor blues showcasing his own, characteristically imaginative soloing.

There was much more, as well.  And the most appealing aspect of the music was centered around Wilson’s efforts to integrate complex ensemble passages with wide open opportunities for soloing.  Often, he spontaneously opened up individual segments if he felt a soloist was reaching into adventurous areas.  Pianist Josh Nelson, alto saxophonist Matt Zelby and trumpeter Josh Welchez always made the most of their opportunities.  And trombonist Ferber, in particular, generated outgoing, sometimes humorous, soloing – often as offbeat counterpoint to the surrounding ensemble sounds.  Supporting everything, bassist Darek Oles and drummer Mark Ferber added whatever was needed – from steaming rhythmic drive to subtle accents.

Leading the way, conducting the players, signaling tempos, Wilson also found time to insert a few of his own always fascinating individual excursions.  His most appealing qualities as both a soloist and a composer are his unpredictability and his capacity to find magic in unexpected places.  And both were amply present in this entrancing evening.