Brigadoon is a classic musical with book and lyrics by Alan Jay Lerner and music by Frederick Loewe. Songs from the score, such as “Heather on the Hill” and “Almost Like Being in Love,” have become standards. The latter song has been embraced by many jazz performers, as well.

The musical tells the story of a mysterious village in the Scottish highlands that appears for only one day every hundred years.  To the villagers, however, the passing of each century seems no longer than one night. This strangeness is viewed by them as a blessing rather than a curse, for it saved the village from destruction. Two American hunters, Tommy and Jeff, lost in the highlands, stumble upon the village just as a wedding is about to be celebrated.  Their arrival has serious implications for the villager’s inhabitants and, of course, also leads to dancing and songs.

The good-natured and enduring show originally opened on Broadway in 1947 and continues to enjoy frequent revivals to this day. One of the best is the current production by the Fullerton Civic Light Opera (FCLO) organization.  The male lead, Tommy,  is portrayed by Robert Patteri, who has a powerful baritone that he softens on his duets with Jennifer Matthews, who plays Fiona, the female lead and his love interest. Matthews is particularly impressive; her soprano is bell-like, pure and vibrant. If she does not have CDs available, she should.

Patteri and Matthews were arguably better in their leads than Gene Kelly and Cyd Charisse in the 1954 film version of Brigadoon. Their duet on “Almost Like Being in Love” was stellar, as was their treatment of the well-known “Heather on the Hill.” Patteri was particularly effective on “There But For You Go I.”

Ted Leib’s deadpan delivery brought the sardonic, boozing Jeff (Tommy’s hunting buddy) to life and he was inarguably better in this role than Van Johnson in the movie. Leib’s scenes with the lustfully cheery Meg Brockie were a treat. Meg, by the way, was played perfectly by Katherine Larsen (Elaine Stewart in the movie). And the lovely and graceful Mallory Cooney King, who portrayed Fiona’s newly-married sister Jean, is a world-class ballerina. 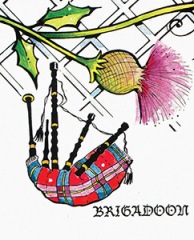 Speaking of the dancing, many kudos to the choreographer Karen Nowicki. The sets and scenic design also deserve praise as do the eye-catching colorful costumes and the playing of the 20-piece FCLO orchestra under the baton of Lee Kreter. Brigadoon has a quiet charm and is an enchanting piece of musical theater. To see it produced and performed with such enthusiasm and talent is a treat.

Today is the last appearance of Brigadoon at the Plummer Auditorium. The FCLO production now moves south to the California Center for the Arts in Escondido with performances on May 28th through the 30th.