Listening to this recording, experiencing its warm embrace, I can only marvel that Luis Muñoz does not have wider visibility.  The Costa Rican-born composer’s music begins with the subliminal qualities of his native roots, then blossoms into a creative expression that transcends boundaries reaching from jazz to classical to pop and beyond.

Invisible is an album in which atmosphere and emotion are central  Each work takes the listener into new territories of emotional experience.  Muñoz’s techniques are far reaching, choosing instrumental timbres in utterly unpredictable ways, searching for precisely the right combination of tones and textures to satisfy his creative goals.

In the opening “Adam’s Dream,” melody is doubled, unpredictably, by bass and trumpet.  “Luz del Sur” simmers with a sub-divided 12/4 rhythm over which Jonathan Dane’s Miles Davis-inflected trumpet brings the counterpoint of urban sophistication to the roots qualities of John Nathan’s marimba.

David Binney’s adventurous alto saxophone takes center stage in “Sobre Vivencia,” at first over stirring, metrically shifting rhythms, then blending with the infectious rhythms of dancing percussion.  The mood changes unexpectedly with the arrival of the spiritual phrases of Muñoz’s soulful “Hymn” – “Blessed are the ones who surrender to Love/For they’ll inherit the Kingdom of Heaven” — sung beautifully by Lois Mahalia.

“De Alma Y Sombra” begins with the feeling of a Bach chorale before evolving into a showcase for a lovely solo from pianist George Friedenthal, and “Esperanza” adds a quiet pastoral quality via a duet between bassist Tom Etchart and guitarist Chris Judge.  A pair of vibrant pieces, “Malabarista” and “Manantial” bring more divergent sounds, the former with an upbeat trumpet and tenor melody suggesting the sound of the Jazz Messengers rambling over layered Latin jazz rhythms, the latter with Ron Kalina’s chromatic harmonica and a collection of rich vocal harmonies supporting Teka Pendiriche’s solo voice.

It’s a fitting climax to a program that never fails to entice one’s attention.  But with the orientation of today’s music world, Invisible may be an unfortunately prophetic title, reflecting how much attention the album could receive, given the myopia of most major media toward new creative ideas.  If so, that will be a shame.  Muñoz is a talent who should be far more widely heard. 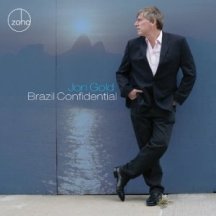 The first minutes of “Alem Do Azul,” the first of twelve original compositions by pianist Jon Gold, make it clear that this is an album that demands attention.  The combination of floating rhythmic undercurrents from Gold’s seven piece ensemble, blended with soaring flute work from Jorg Continentino, announce that a uniquely fascinating mixture of Brazil and jazz is in the works.

But that’s just the start.  As the tracks unfold, the momentum reaches in one direction, then another.  “Funky Jabour” showcases saxophonists Anat Cohen and Bryan Murray over a driving rhythmic groove.  “Teresinha” dips into bossa nova, followed by even more bossa in Tatiana Parra’s singing on “Confissao,” and Leah Siegel’s intimate, wordless vocals on “”Paraty” and “Parazen” (with guitarist “Scottinho” Anderson leading the way).

Other tunes further display Gold’s compositional vitality: the surging melodies of “Carioca Da Clara,” the quirky, off-beat sounds and rhythms of “Vitamin B,” and the Brazilian bebop of “Parafuso A Menos” (sparked by Cohen’s driving clarinet). Add to that the balladry of  “Singela” (featuring Katie Scheel’s English horn) and the emotional twists and turns of the suite-like “Rapadura,” topped off with Gold’s lyrical re-imagining of Janacek’s Suite No. 4.

It’s fascinating, all of it – compelling because it presents a musical imagination that has been inspired by the culture of Brazil without superficially attempting to imitate it.  And that’s a true rarity.