Argentine pianist and composer Guillermo Klein is at the forefront of global jazz. His music, usually performed by large ensembles, freely draws from jazz, classical music, tango, Argentine rock and folk music. In Domador de Huellas, Klein applies his imagination and craft to the music of  composer Gustavo “Cuchi” Leguizamón, a one-of-a-kind figure in Argentine music: pianist, poet, lawyer, politician and raconteur extraordinaire.  The project actually started as a 2008 commission by fellow pianist and composer Adrian Iaies, artistic director of the Buenos Aires Jazz Festival. It was an inspired choice.

Leguizamón, who died in September 2000, two days before his 83rd birthday,  was a sly sophisticate who loved Bach, Stravinsky and Beethoven but also wrote enormously popular songs in traditional folk styles such as zamba, vidala and chacarera. The songs, which sound easy on the ear, are a model of elegance and astute design. He celebrated the tradition just as he challenged it. And Leguizamón was also a wily storyteller. A couple of live albums (his songs are widely recorded and performed but there is scant record of his own playing) capture him in concert, playing and talking. It’s a mesmerizing act. His speech, now in a conspiratorial whisper drawing his audience in, now leaping wildly to underscore a point, often suggests Monkian contours. It’s music by another means.

Klein, who says that when he got the assignment he knew Leguizamón´s songs without realizing they were his, became a student of his music and pays him the best possible tribute to such a creative free spirit: he takes him up on some of the many musical options his music suggests.  In fact, in some instances Klein has even transcribed the pitches of Leguizamón’s speech and turned them into actual musical text. 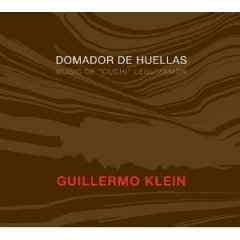 There are no clever reharmonizations or jazzified rhythms here. Neither is this a nostalgic folkloric celebration. The traditional rhythms are at best implied and suggested, but only briefly, as if saying that for those who know them implication and suggestion should be enough.  And for those who don’t, well, it doesn’t really matter.  Working with an octet augmented by singers in four tracks, Klein recomposes the music while preserving its spirit. “Maturana,” originally a stately zamba, becomes a brass chorale – preceded by a Schoenbergian solo piano intro. “Carnavalito del Duende,” (the carnavalito is a festive rhythm from Peru, Bolivia and northwest Argentina) takes on a funk bass pattern without losing a step. And Klein practically deconstructs the classic zamba “La Pomeña,” trusting the excellent singer Liliana Herrero, a contemporary folk star in her own right in Argentina, to carry the song while the rest of the ensemble plays off her. And in “Chacarera del Zorro,” Klein’s sing-speech evokes Leguizamón’s angular speech patterns before launching into a forceful, jazz band version of a chacarera rhythm.

True, this is the kind of project that perhaps might be most enjoyed by musically bilingual-bicultural listeners. If you know the originals, you will find yourself smiling more than once. But don´t let that deter you. Ultimately, good music transcends and should stand on its own and Domador de Huellas features songs, arranging and playing at a level of quality that is a joy in any (musical) language.