Charles Lloyd was mesmerizing  everybody in a Jazz Bakery Movable Feast at the Nate Holden Performing Arts Center Saturday night, and the place was full. The former Howlin’ Wolf sideman is an expert at this, nor was he in the least hampered by his own sidemen.

On the contrary, young star Jason Moran was first among equals in the latter bunch, and his piano playing was refreshingly Rachmaninoffian. His intuitive powers had plenty to do, because equal Reuben Rogers was playing bass and equal Eric Harland was behind the drum kit, and they were all equally spiritual.

Not that Lloyd always hit the target. But almost always.

That sound of his: a whisper with bones. He played the main notes only after draping them fore and aft with delicious little curlicues, like smoke from a thurible.

He was all sweetness and light, in the European vernacular.  Everything was the opposite of rock, with no remnant of his work with the Beach Boys. But he can play a part nobly no matter where he happens to land.

“Monk’s Mood,” with its miniaturized concerto format, came out as a long curve; “Beyond Darkness” showcased his flute powers. Late in the program, “Forest Flower” was as moving as ever. All of them surely came straight from a 72-year-old heart. 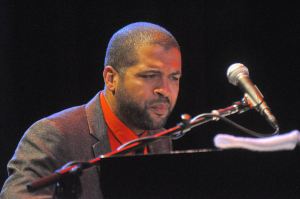 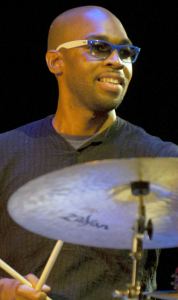 That heart lifted “Come Sunday” to a place in many other hearts present, underscored by the work of the fresh-faced  young disciples: Moran from the piano, Rogers from his bass, and Harland at the drums. 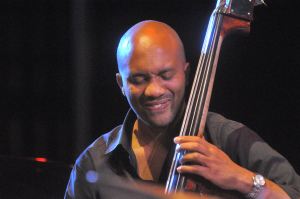 Photos by Tony Gieske.  To read and see more of Tony’s essays and photos at his personal web site click HERE.