Often, when a host of stars gather together to record with one of their legendary influences, the results are rather ordinary.   Jerry Lee Lewis’ latest release, Mean Old Man, produced by Jim Keltner and Steve Bing, is a refreshing and tasteful departure from this syndrome.  The personnel on this album are indeed stellar, the performances are inspired, and most importantly, the choice of material is winsome. 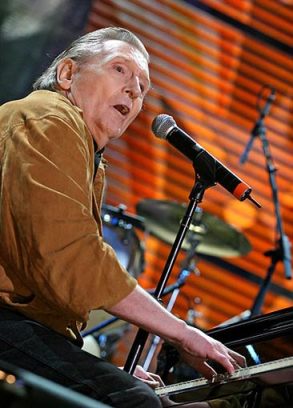 Jerry Lee Lewis is probably best known as one of the earliest rock ‘n’ roll musicians to have huge success, having lit the up the radio world more than 50 years ago with exhilarating and suggestive classics such as “Great Balls of Fire,” and “Whole Lotta Shakin’ Goin’On.”    Between his music and his controversial reputation for hard living, he has influenced the tastes and imaginations of generations of musicians. An elite group of these folks helped JLL make this album.  The personnel fills a true A-List and includes Mick Jagger, Keith Richards, Ronnie Wood, Eric Clapton, Ringo Starr, Willie Nelson, Merle Haggard, Tim McGraw, Sheryl Crow, Kid Rock, Slash, Shelby Lynne, John Fogerty, Gillian Welch, Mavis Staples, Robbie Robertson and Nils Lofgren.

Mean Old Man allows Lewis to adapt his vocal and piano styles to material ranging from gospel to rock ‘n roll to several speeds of country. You can hear these folks stepping into the moment and making the songs sound special.   He rocks with guests like Kid Rock and Slash on “Rockin’ My Life Away,” and then with Ringo Starr and John Mayer on “Roll Over Beethoven.”

Lewis and Kid Rock’s approach to the same song are quite a contrast.  Lewis’ vocal sounds warm, poised and soulfully in control, while Kid Rock howls and growls his way through, perhaps giddy to actually be in the studio with the Killer, himself.   Still, what really propels the track is Lewis’ trademark rolling piano meshed with a streamlined boogie-woogie rhythm section.

After listening to Mean Old Man, one cannot help but be impressed by Lewis’ country sensibilities.  All of the tracks in this collection have a country bend in their arrangements, and this suits Lewis’ voice and piano.  Setting his style over steel guitars, skipping snare drums, and simple clean bass lines in the country tradition works like a charm.   He shines as he sings “Swinging Doors” with Merle Haggard and “Whiskey River” with Willie Nelson.   He sings beautiful duets with Gillian Welch on “Please Release Me,” and  “I Really Don’t Want to Know,” that deliver the heartache and lament in sparse, whining glory.  The latter, in particular, is a reminder of the huge value in a good song getting the right arrangement. 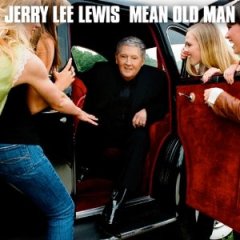 No less than three Rolling Stones appear among the guest stars.  With the addition of a fine, swelling steel guitar track and Jerry Lee’s voice “Dead Flowers” transcends into the truly country song it was likely conceived to be.  It’s interesting to hear Mick Jagger singing backups on this very familiar track as it becomes apparent that the sentiments in this song are tailor-made for a voice like Lewis’.   Keith Richards joins Jerry Lee for a romp through “Sweet Virginia” that features a gem of a piano break by Lewis (and cleaner shoes for Virginia).   Ron Wood joins for the title track written by Kris Kristofferson and sung proudly, yet with restraint and resignation, by Lewis.

Time after time on Mean Old Man the songs become topical for Lewis.  Whether the song is about boozing, womanizing, rocking, remorse or redemption they all seem as though they could have been written with him in mind as the singer.  Thanks to Lewis, the star-filled line-up, the arrangements and the performances, this eminently listenable album succeeds in delivering the essence of the songs.