As painful as it was to hear of James Moody’s death yesterday, it was no surprise.  For at least the past ten months Moody has endured the awful tribulations of pancreatic cancer.  After surgery in February to have the tumor resected turned out to be too life threatening, he spent nearly two months in an intensive care unit.  More recently, he opted to refuse radiation or chemotherapy.

It was, by any definition, a difficult final journey for a man who famously brought light and cheer to everyone who either heard him, or who was blessed enough to spend time in his company.  Moody, as he preferred to be called, inevitably greeted friends with a hug and maybe a kiss on the cheek.  And his buoyant good humor extended from sly jokes to a musical wit comparable to that of his long-time close associate, Dizzy Gillespie. 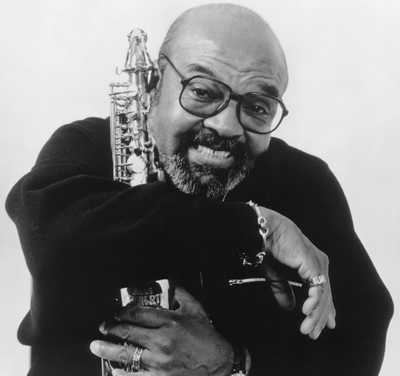 He was best known, perhaps, for the spontaneous solo he played on “I’m In the Mood For Love” at a 1949 recording session in Sweden.  Superbly constructed, rich with melodic motifs and themes, it would be a jazz classic comparable to Coleman Hawkins’ solo on “Body and Soul,” even without its subsequent history.  When Eddie Jefferson added whimsical vocalese, and King Pleasure recorded it (in 1952), it became an off-beat hit, reaching well beyond the jazz world.

Moody had much more to say musically over the following decades.  And it was that work – right up to the past year or so – that was so utterly irresistible.  Moody’s live shows were filled with humor – often expressed in his own sardonic vocal take on “Moody’s Mood” and the more broadly hilarious “Benny’s From Heaven.”

But, for this listener, it was his tenor saxophone and flute playing that was most mesmerizing.  Playing tenor with a tone enlivened by a vocal-like cry, an unstoppable sense of swing, and a unique gift for melodic invention, he created solos frequently rivaling, often surpassing the classic “Moody’s Mood.”  His flute work was equally remarkable, in its own way, applying the pointed tone and clear articulation of classical flute style to the same far-ranging improvisational imagination present in his tenor soloing.

Whenever a great musical artist passes away, listeners are always thankful for the immortal presence of their recordings.  And so too it is with Moody.  I will surely be listening, happily, to his CDs for the rest of my life.  But I will also be missing – as will so many others – the warmth of his smile, the ever present twinkle in his eyes, and the authenticity of his friendship.

One thought on “Here, There & Everywhere: James Moody R.I.P.”