Let’s talk about that undermeditated topic, lighting. The lighting at Vibrato’s voluminous listening room, for instance, is without stain and healthy, which is to say clean and well.

Equally clean and well lighted, if you’ll forgive the segue, was the Steve Huffsteter big band, a precision ensemble that played the room last week.

They did not take their cue from the leader, whose trumpet playing was not at all clean and well lighted. On the contrary, his tactic, as he stood quietly in darkness before the gentlemen and lady of the ensemble, was to glitter with intelligence and gleam with subtlety. 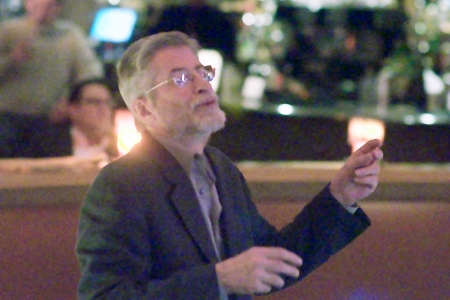 Not that he learned that from his first foray into the big time as a member of the Stan Kenton trumpet section, the echoes of which still lurk in various L.A. crannies. He just seems to have it in him to glitter, not that he’s gay.

The sidemen who soloed were not to be disdained by comparison with the maestro, either.

“Steamroller” opened the set I caught, and it lived up to its title, which could fortunately not be said for many of the other numbers.”7th Heaven” was a good example, an earthy passage all in 7th chords. The stars on the stand raised it to the skies.

“Backseat 56” celebrated that funkless decade, the one in which Eisenhower and Miles Davis ruled, with a decidedly 21st century vibe.

Tull, the poor man’s Dave Frishberg, did not favor us with song, but made sure the shape of things that were coming stayed more than accessible.

Photos by Tony Gieske.  To read and see more of Tony’s essays and photos at his personal web site click HERE.