As is the case with many of the most talented artists, Marty Grebb is a household name among mostly the top and more well known musicians — most of whom he’s played with as a multi-instrumentalist, arranger, and composer over the past four decades — rather than the non-playing, pop music buying public. Grebb has recorded and performed with everyone from Leon Russell, Bonnie Raitt, Eric Clapton, Stevie Nicks, Etta James, and Buddy Guy, to name only a few.

Grebb’s latest CD, High Steppin’, is a loving tribute to the blues and soul music he grew up with in Chicago. The album has already gotten the attention of peers such as Leon Russell and Garth Hudson. 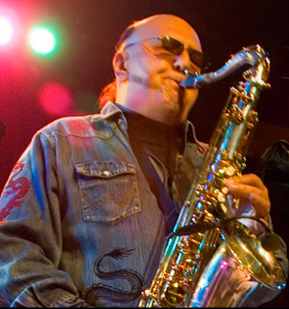 Bonnie Raitt commented about it: “Marty has always been one of the most soulful, and versatile artists I know. From our years playing together in my band, to his broad history playing on his own and with many of the greats, Marty is one of the very few musicians who can nail singing, keyboards, saxophone, guitar, bass, drums, songwriting, and arranging with equal passion and authenticity. He’s made another great, funky record in High Steppin’. Terrific all the way around.”

Long before joining The Buckinghams in 1967, Grebb was signed to Vee Jay records with the Exceptions when he was 16 years old. During that time, he met Muddy Waters, Buddy Guy, Jimmy Reed, John Lee Hooker, and Etta James, all of whom helped to shape his deeply sincere, blues-based sound, and most of whom Grebb would end up working with throughout his career.

“Heartbreaker” and “Can’t Get You Out Of My Mind” (both co-written with Leon Russell) are  low-down, minor key blues that have Grebb playing down and dirty Otis Rush-style Chicago blues guitar leads with tightly punctuated horn hooks. Grebb’s vocals are exceptionally soulful. There’s a hint of Ray Charles and Bobby “Blue” Bland” at first, but he eventually departs from the obvious influences and demonstrates a totally unique sound. His alto sax solo on “Heartbreaker” is brilliantly melodic.

Clifford’s Mood is an instrumental dedication to Bill Doggett’s original tenor sax master, the late Clifford Scott. Grebb’s tenor work has sparks of Scott’s style, but he again departs into his own bag of tricks. This takes the listener back to those classic Doggett sides on King records of the mid ‘50’s. Grebb also serves up a smooth and funky guitar solo that is true to the style and era. This is one of the most daring recordings laid down in a long time.

Grebb’s slowed down, funky rendition of Rufus Thomas’s “Walkin’ The Dog” is one of the greatest and most original readings of this Memphis classic ever recorded. Grebb’s stinging lead guitar solo is pure, with a delicious blend of Johnny “Guitar” Watson and Albert King without sounding derivative. Grebb’s churning keyboard work in the background and passionate vocals make this worth the purchase of the CD alone.

The rocking soul of “Tulsa Town” and “Lowdown Blues Again” combine the vintage blues/r&b sound of Atlantic records of the early 60’s with the looser, blue-eyed soul of Leon Russell in the late 60’s and 70’s (to which Grebb was a key contributor).

“Treat Your Daddy Mean” (dedicated to Muddy Waters) is the kind of pure blues not recorded in a long time and one of the album’s most inspired recordings. Along with some terrific blues harp and acoustic guitar playing, Grebb’s vocals on this number put him in the ranks with some of the all time great blues singers. It’s hard to believe this track was recorded in this day and age.  The same could be said about “One Night” and “Let A Butterfly Cross The Road” — slow Ray Charles blues numbers that not only pay tribute to the “Father Of Soul” but give the late master a run for his money, with Grebb’s pleading and mournful vocals and soft, dynamic piano playing.

“Never Gonna Let You Go” may be the most commercial sounding track on the album, with its Motown- esque vocal hooks and reverb laden horn lines.  But it doesn’t, for one moment, take away from the power and genius of High Steppin’.

High Steppin’ is a powerful statement that real blues and soul presented with authenticity still exists. Coming from a man some might have overlooked as a session player over the years, Marty Grebb comes out swinging, playing every instrument at a jaw-dropping level of brilliance and devotion.