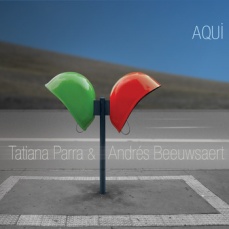 Brazil seems to produce singers, and especially female singers, like it produces soccer players – in quantities, maybe growing wild on some native trees, all seemingly casually talented, and slightly unclassifiable.

Singer Tatiana Parra marvelous first solo album, Inteira (Complete), released last year, seemed to come out of nowhere — yet Parra, then 29, sounded fully formed. A few months ago arrived the exquisite follow up of sorts, Aquí (Here) with pianist and composer Andrés Beeuwsaert, a member of the Argentine new folklore group Aca Seca, who contributes several pieces. As it turns out, according to her bio, Parra started her professional career at age five. She sang in commercials, jingles and children’s music while studying classical piano, eventually graduating to a career as a busy backing vocalist whose credits include both Brazilian and touring artists.

In Aquí the material includes both wordless and conventional songs. The instrumentation is minimal, mostly just voice and piano. A flute, a cello, and a guitar are added, one here, one there, mostly one at a time, like brushstrokes of color, in several pieces. Only one track — “Tankas” — a song by Argentine pop star and former Pat Metheny Group member Pedro Aznar, with lyrics by poet Jorge Luis Borges, features a quartet of voice, piano, flute, and cello .
The wordless pieces, such as the lyrical “Sonora,” the playful “Brincando Com Theo,” or the intricate “Jardim,” suggest a marvelous oxymoron, unpretentious art songs, dazzling only on a closer, second listening. Here Parra and Beeuwsaert evoke the work of Norma Winstone and John Taylor.

Singing lyrics, Parra is coolly expressive, carefully doling out her feelings while letting the words carry the drama. (A side note, check the startling change in color in her voice when she sings in Spanish on the Chilean song “Cueca del Agua.”) She has a limpid but warm voice, impeccable diction and intonation and a rabbit’s agility for bursts of speed, quick jumps, and unexpected turns (“Milonga Gris,” Edu Lobo’s “Corrida de Jangada”). Beeuwsaert, is an accompanist/ equal partner here. Theirs is a smartly designed dialogue. And Beeuwsaert has an arranger’s ear for space and discreet shadings, never crowding Parra or pushing his own, eloquent playing (as in the same “Milonga Gris”).

Aquí is a small jewel. Find it.

The brittle condition of record labels (and not only jazz labels), has nudged artists into a do-it-yourself approach, and why not?. Cuban pianist Gonzalo Rubalcaba has launched his own label, 5Pasion. Its first release is Rubalcaba’s Fé (Faith), a challenging solo piano recording including both originals and standards. This is no conventional, toe-tapping fare. Historically, in Rubalcaba’s approach elements of jazz, classical, (Cuban) traditional and popular music, have informed his playing and writing. In Fé, Rubalcaba blurs the lines once more, while taking a decidedly exploratory approach. He deconstructs “Blue in Green,” (twice), and Dizzy Gillespie’s “Con Alma” (three times), and uses the harmonic structure of John Coltrane’s “Giant Steps” as the basis for his own “Improvisation 1” and “Improvisation 2.” These pieces, and his own, play out as starting points from where he launches examinations of textures, space, counterpoint, melodic variations and more. It’s a work that suggests and demands, appropriately, a leap of Faith.

Singer Susana Baca, a champion of Afro-Peruvian music, has been named Minister of Culture in her native Perú. Newly elected Peruvian President Ollanta Humala, who took office Thursday, July 28, named Baca to the post, making her the first Afro-Peruvian minister in the country´s history.

In choosing a talented, socially committed, and professionally active artist to lead the cultural area of his administration, President Humala follows on the footsteps of former Brazilian president Luis Inácio Lula da Silva who called on singer, and songwriter Gilberto Gil to be his Minister of Culture (2003-2008).

Baca recently released Afrodiaspora (Luaka Bop), an ambitious recording that samples African influence in Latin American music. According to press reports, the minister plans to continue her musical career (as Gil did, to a degree). She performed at the Lima Book Fair the very same weekend her administration took office .