Brazilian singer/dancer/songwriter Daniela Mercury is a Latin Grammy Award winner, a prolific creator of best selling albums (more than 20 million), and one of her country’s most visible and popular female artists.

So it was no surprise at the Greek Theatre Thursday night when the audience members – liberally populated with the Southland’s Brazilian community – found it impossible to stay in their seats, transforming the evening into an all-join-in celebration of Mercury’s memorable songs.

As so often happens in Brazil, virtually every number was enlivened by audience sing- and dance-alongs, buoyantly encouraged by Mercury.  And in the final climactic minutes of her program, when she asked the audience to rush – following her lead – from one side of the aisles to the other, most of the crowd joined in, following her instructions with the enthusiasm of a bunch of high spirited fifth graders.

Nothing wrong with a performer who can trigger that kind of passion from an audience.  And Mercury communicated a seemingly genuine sense of joy in what she was doing – whether she was smiling happily, shouting commands to her musicians, dancers and the audience, or telling stories between songs in English and Portuguese.

But what made the program compelling for listeners who were not especially driven to samba in the aisles or join in the choruses of Mercury’s songs was the musicality of her art, a fullness of creativity that added memorable substance to every note she sang, every move she made. 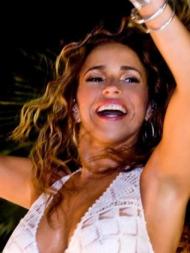 Much of her program suggested a contemporary version of Tropicalia – the movement of the ‘60s and ‘70s that opened Brazilian music to elements from other cultures.  Obviously fascinated by African music and dance, Brazilian poetry and cinema, Mercury’s company of musicians and five dancers showcased some of the colorfully eclectic material from her album, Canabalia.  At one point, she sang along with a Carmen Miranda recording from the late ’30s.

Beyond that, the vigor, the excitement and the sheer facility of Mercury and her dancers – who included her daughter, Giovanna — were mesmerizing, enhanced by carefully planned stagecraft and lighting.  The stellar six piece band – including her son, singer-guitarist Gabriel – was the subtle, but vital propulsive engine, charging and stimulating every aspect of the show, from the lively adventures on stage to the happenings in the audience.

Mercury makes few appearances in Los Angeles – only two that I can recall over the past decade or more.   Hopefully there will be others in the not too distant future.  As this remarkable night affirmed, she is an artist with a great deal to offer, from every aspect of her richly imaginative creative skills.