Blues/Southern rock guitar veteran Warren Haynes has never been one to rest on his laurels. From his stints with The Allman Brothers, and his own group Gov’t Mule, Haynes has proven to be a powerful guitarist and composer and equally soulful vocalist  who is intent on continuing to grow musically.

The two CD set Live At The Moody Theater in Austin TX  shows a more mature and focused Haynes as apposed to some of the typical guitar over indulgences he displayed during his Allman Brothers and Gov’t Mule days, though some of that still exists on this recording.

There’s a diverse range of styles and influences in the performances. Haynes’ own compositions such as “Man In Motion,” “Sick Of My Shadow,” and “Fire In The Kitchen” are fused gospel, classic rock, modern country, reggae, and blues. Haynes sound like a gospel preacher on the Allman’s-esque “Friend To You,” with exceptional Leslie speaker keyboard effects by Nigel Hall.

Haynes guitar licks are clear and vocal but tough. There’s a sweet blend of B.B. King, Hendrix, Johnny Winter, and Albert King.  Ron Holloway’s tenor sax solos and harmony lines (played in unison with Haynes’s guitar lines) adds a surprising slickness to this album. Proof of this is on the rollicking “Invisible,” in which, Haynes, Hall, and Holloway all swap long (maybe too long) solos and the grounding presence of Holloway keeps it from sounding too Jam Bandish.

The Grooveline Horns (Carlos Sosa: Sax, Fernando Castillo: trumpet, and Reggie Watkins: trombone) help Haynes and company contribute to that one of a kind Stax sound, adding punctuated horn hooks on the blue eyed-soul of “Man In Motion,” and a very original rendition of Sam Cooke’s “A Change Is Gonna Come.” Haynes brilliantly shares vocals with singer Alicia Chakour.  Ron Johnson’s bass playing stands out as he leaps up and down octaves effortlessly. On numbers like this, Haynes’s vocals easily outshine his guitar playing.

Though Haynes is a strong songwriter in his own right, it’s the covers that are the most interesting on this live recording. Haynes vocals on the William Bell classic “Everyday Will Be Like A Holiday” are as soulful as Bell’s, and a reading of Steely Dan’s “Pretzel Logic” might surprise the Southern rock fans but makes perfect sense. It’s a pure Ray Charles feeling, minor-key blues with Donald Fagen’s wonderfully esoteric lyrics. Haynes guitar playing and tone here are very close to that of Walter Becker’s on the original recording.  Holloway’s saxophone and Chakour’s backing vocals really fit in perfectly on this number.  However, the song could have done without Higgins long drum solo. 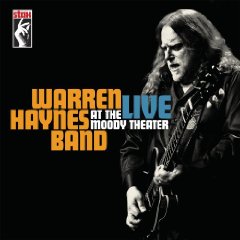 The cover of Ziggy Marley’s “Dreaming The Same Dream” has a reggae meets The Grateful Dead feel to it but Haynes and his band take it deep down South, especially the combination of Haynes and Chakour’s vocal harmonizing mixed with Hall’s Hammond B-3 gospel organ comping.

The band’s take on Jimi Hendrix’s “Spanish castle Magic” is overdone.  It may have been a big crowd pleaser at the gig but on a recording it’s too much. So many musicians forget the thematic quality of Hendrix’s music and just go jam crazy which is the case here. Way too much wah-wah.

Though the band goes overboard at times, The Warren Haynes Band Live At The Moody Theater, gives both his longtime fans what they want with long jams and also shows a more subdued, orchestrated Haynes, thinking more about the songs as a whole and achieving a bigger band sound.