Of Faraway Places with Strange Sounding Names (Like Nebraska)

I have been Swept Away by music from such exotic places as Albania, Switzerland, Brazil and Nebraska. What’s exotic about Switzerland, you ask? Meet Nick Bartsch and his Ronin if you haven’t before.  We’ll continue our journey once you’ve fallen under their spell.

Melancholy comfort on a cold, gray day. Sun worship on a bright one.

Sometimes called a Zen funk group, Ronin is more of a Transporter in time and space.  Smooth jazz will suddenly funk up to a frenetic rock pace. Leader Nik Bartsch’s piano runs will dazzle. His Fender Rhodes playing adept and exhilarating.

Double bass, clarinet, sax and varieties of percussion intermingle and enhance.  This is the background or theme music you might want for your life to keep you focused on painting, writing, carpentry, walking in a glen — anything that flows from you or through you at a truer level.

I can’t give you song by song descriptions because that’s not what matters here. It’s an immersion in mood and rhythm, thought and feeling.  I also can’t give you many comparisons to more familiar music. It is that unique, though I think it may be a distant cousin to Quicksilver Messenger Service’s Happy Trails, one of the first rock concert albums building on themes and variations and shooting off in surprising directions.

Ronin aficionados may say that is a crazy contention but rock n rollers may feel it.

Matane Malit (Beyond the Mountain) (ECM) 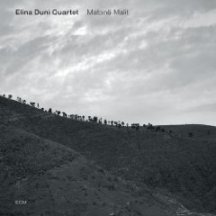 Switzerland is also a home for the Elina Duni Quartet but they have journeyed to that most unknown (to most of us) nation, Albania.

Artists and intellectuals like those from Elina Duni’s family avoided folk music when the commies were running Albania because the songs were twisted and perverted to propaganda, to glorify the state purposes.  In fact, they often avoided even Albania itself and Duni was just ten when she left.

With the collapse of the Eastern Bloc and a return to more of a free market and free political system, jazz singer Duni could return to Albania physically and spiritually to find the folk songs of an earlier time.

The results are presented here with all the poignant beauty of a difficult place.  There is an aching tenderness to her voice which is well balanced by Colin Vallon’s piano.

Of course if you don’t know the language, her voice can only be another source of beautifully played notes in a quartet.  As I listened to the powerful emotions in the singing of these songs I knew I was missing something by not knowing the language.

When I later read the lyrics in the album notes’ English translation, I realized the poetry of sadness and yearning that was present in Albanian culture during and before the communist days.  This, alas, was also a country that knew Mussolini’s fascist fist before the iron grasp of communism. What’s to say when your best days were as part of the Ottoman Empire?

Eliane Elias, former child prodigy in her native Brazil, eventually brought her piano to the United States while Marc Johnson, a symphony musician by 19, had to carry that upright bass  from Nebraska to Texas.  Now they rattle around in a house in the Hamptons, big enough for their instruments and quiet musical vision.

Truth to tell, though, there are places like “Foujita” that perhaps shouldn’t be played for the seriously depressed unless you are interested in population control.

Taken as a whole, their music can at times border on the boring for those raised on the speed and fill-all-the-gaps of American music from swing to bebop to rock ‘n roll. We had to move quickly from cars to jets to internet instant, after all.

The mostly slow pace of Johnson and Elias — though “One Thousand and One Nights” flows and bounces like a more nuanced Vince Guaraldi — occurs elsewhere on the other two albums as well, characteristic of producer Manfred Eicher and ECM.

American listeners and others accustomed to our zoom through life may find their minds drifting at time.  But that’s because the rewards of the ECM style are subtle and contemplative. “The most beautiful sound next to silence” is the ECM motto.

Maybe it could help us.