Of all the poems in all the world my favorite is “Dog” by Lawrence Ferlinghetti and unbeknownst to me till now there is actual footage of the dog in “Dog” and it’s in Christopher Felver’s film. I am extremely grateful.

Ferlinghetti A Rebirth of Wonder will open on Friday at New York’s Quad Cinema.

Of course, the poem isn’t really about the dog, it’s about us and our world and what’s good about it and what isn’t.  And that’s the best summary I can make of Ferlinghetti’s work as he reaches his mid-90s.

It seems to me that’s the point of this documentary made about a child of Italian immigrants: raised in his early years in France; taken in by a rich family who sent him to reform boarding school for his thievery; educated by southern “ivy” University of North Carolina at Chapel Hill because Thomas Wolfe went there; Navy ensign on a converted yacht during World War II; trying to work his way up at Time Magazine before leaving in disgust for Paris and his friend George Whitman who opened the second Shakespeare and Company book store; finally finding his way “home” to San Francisco, the City Lights Bookstore, poetry and painting.

The film takes us on that physical journey and the artistic/spiritual journey of an artist who has said “fuck art, let’s dance” but thinks artists would be ok “if they would put more mustard on it.” He says in the film that he never was a “beat poet” but elsewhere refers to himself as a “beat” in the company of Allen Ginsberg and others.

Of his other art, painting, Ferlinghetti says that “reality painting is just another form of fiction.”  He seeks light, always light, in painting and poetry.  That’s better than “realism.”

All these treasures and more are in the film.

On the political side — and of course there is one with the “natural born nonviolent enemy of the state” that he is — it’s a delight to see Ferlinghetti define himself as an anarchist wishing for nothing more than the “withering away of all government.”  Think of America’s so-called left looking for nothing but larger and larger government.

He was a champion of free speech who risked jail by publishing Ginsberg’s Howl and Other Poems. Yet when I clicked on my laptop to do this review, the first story up was about an Alabama teacher being removed from his post for saying Michelle Obama has “a fat ass.”  Battles to be won every generation.

A curious omission of this film is the link between the second Shakespeare and Company — named in tribute to the first that was shut down by the Nazis — and Ferlinghetti’s City Lights Bookstore. The first was a bookstore frequented by Hemingway and Fitzgerald and that gang in the 1920s and was, under the remarkable Sylvia Beach, the first publisher of James Joyce’s Ulysses.

Fearing lawsuits because Joyce had a nasty habit of putting real people in his stories, Irish publishers wouldn’t touch it.

The connection is that Ulysses, like Howl, was deemed obscene by the authorities. Not until a court case decided the question in the 1930s could Ulysses be published in the United States. Battles to be won every generation.

This documentary makes it sound like Ginsberg’s book of poems, published by Ferlinghetti’s City Lights Bookstore, was the start of free literary speech in America.  Important as it was, the Howl case was won on the same grounds as the Ulysses case; that the work had redeeming social value.

But enough of that.  The film overcomes such a hole via a series of interviews with other writers and artists of the era and great footage of Ferlinghetti with Ginsberg, McClure, Corso, Kerouac, even Dylan.

The filmmaker also has a wonderful narrative sense and takes us through Ferlinghetti’s life till now like Kerouac taking us on the road. The film just flows along and time gets lost.

There are wonderful Ferlinghetti nuggets throughout:

- At the height of a San Francisco “be in” with Ferlinghetti, Ginsberg and Timothy Leary onstage and Jefferson Airplane on the bill, Ginsberg turns to him and says “What if we’re all wrong?”

- “There isn’t any away any more,” the world wandering poet warns. “There’s a Hilton in Tahiti. What can Gauguin do about that?”.

- “Never trust the government,” the socialist poet warns. “It wants to destroy the subjective in each of us.”

- Ferling was not the real family name he eventually finds out.  Many Italian immigrant families, including my mother’s, found that a few less vowels helped with acceptance and employment in the US of A.

– Accepting grants from the National Endowment of the Arts is collaboration with a repressive government and poets and artists should never be collaborators.  Ha! 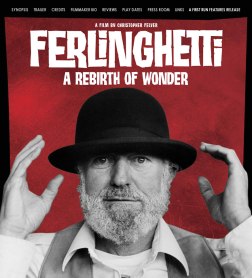 Ferlinghetti near the end of the film says that the world’s political, economic and environmental problems will never be solved until we achieve population control.  I don’t know about that. Who’s to say when the next Ferlinghetti might come along?

So see this film if you can, if it’s shown outside of a few big cities if you don’t live in one. Or hope for a DVD release. Like Twain, like Hemingway, Ferlinghetti is an American original.

So I must close with a bit of “Dog” that he wonderfully recites in the film:

with his head cocked sideways at street corners as if he is just about to have his picture taken . . .

and looking like a living question mark into the great gramophone of puzzling existence. . .”