The range of great American music never ceases to amaze me.  When they’re writing about our civilization, such as it is, a number of centuries hence I am quite sure it will be our music that is most treasured and remembered.  Unless the whole grid collapses, of course.

There is just no disputing the good time of bad times this EP (not LP) provides the listener.  Five tunes, one done twice, to take you deep into the heart of American music done road house bounce — blues, r&b, zydeco, Tex-Mex, Looziana all tied up in a just dazzling display.  In other words, rock and roll to delight the soul.

What Casper and his new Cowboy Angst lineup understand is that it’s all connected.  From the hills of West Virginia to the Delta. From Nashville to New York. At its best, it’s all American music. The Band knew that and so does Casper.

“Cat On A Hot Tin Roof” opens the proceedings and rightly so; a nasty tasty blues/gospel tune you won’t hear in church, with two McCrary sisters singing backup to Casper’s lead vocal.  In this version, it’s the guy who’s the cat.

Then here comes “Soul Deep”. Real nice lap steel guitar by John Groover McDuffie. Tom Petty would probably have a hit with this.

“I know where you end is the start of me.”

The title song is pure Louisiana  barroom rock.  How can trouble make you feel so good.

But the absolute gem of the album is “How Can I Miss You When You’re Not Gone?” Keeps the Cajun going and the irony can’t be missed.. The song is repeated as a “front porch” instrumental with banjo and fiddle to finish out the album.  But the first version will make you dance alone if there’s no one to dance with.

“Hey Marie” reaches way back to the 1950s to what Don and Phil Everly might have cut with Chuck Berry if songs could have been so damn bad back then without being censored or masqueraded. Chuck knew how to do that.

Marie writes on the wall: “Had a real good time. Don’t bother to call.”  Years later he sees their history “while standing in the grocery line.”

This little album is so good we might not deserve it. But it’s here this summer.

Something special your way comes on May 14.

Noah Preminger, like Hemingway, boxes.  And like Hemingway he’s clear and concise.  He wants you to get it without the merely decorative and overly descriptive.  Here, here it is. Hear it.

On Haymaker, his tenor sax is moody and reflective at times — think Hawkins — as on the opening tune “Morgantown.”  Lovely and cool at other times — as on “Tomorrow,” whether you liked the musical Annie or not.

All saxophones played well are great to me, but tenor is the most satisfying; expressive and deeply touching. It’s why Kerouac called players of the instrument “tenorman.” They were special. Still are.

There are good songs all over the place. Preminger can’t remember what girl he wrote “My Blues for You” for, so it’s for all the girls you’ve loved.  Ben Mondor’s guitar solo picks up Preminger’s mood but it almost hurts when his horn breaks off.

Monder steps out front in the intro to his composition “Animal Planet.” Real smooth. Then Preminger comes in with such melodic lines.  A real favorite of mine.

On “Stir My Soul” and elsewhere, drummer Colin Stranahan sometimes annoys with his insistent pounding.  Oh, he’s good but he doesn’t need to fill every available space.  More Charlie Watts, less Keith Moon, please. Or listen to the next album (see below).

Still, he’s fine on the Dave Matthews song “Don’t Drink the Water.” The band makes you feel so good here as they start real smooth, go off into space and then return to the song’s melody.

“Motif Attractif” is a sweet little sendoff to close the album.

Preminger’s playing — ascending, descending, roaming, retuning — is just so sensitive to tonality, melody, timing and the other musicians that he is special to hear.

A haymaker in boxing can produce a knockout all on its own.

Shoot for the top.  Can’t hurt and it might work.

Drummer supreme Terri Lyne Carrington does just that with a reworking of Duke Ellington’s remarkable trio recording Money Jungle with Charles Mingus and Max Roach.  She gathers up the superb piano of Gerald Clayton and bassist Christian McBride with a few others and nails it. 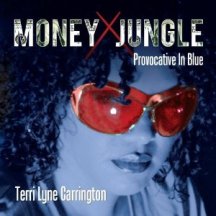 I’m kinda late reviewing this album that came out during the winter but it got buried in the stack and just has to be paid homage to the way she pays homage to Ellington.

Even when she throws in a few of her own songs she seems true to the Duke.  I think he would have liked them. A lot.  And Clayton gets his own cut, “Cut Off,” which also resonates as a true Ellington descendant.

But the Ellington tunes, oh yeah.  A money hating downer narrative leading us into the album is overridden by the joyousness of the music that follows.  Clayton’s piano complemented just perfectly by Carrington’s drumming. She understands that the spaces are as important as the hits.

The only jarring note in the tune “Money Jungle” is the music being interspersed with speech clips from various politicians.  Doesn’t do much for me.  Money may be the enemy of art, but try paying the rent without the coin from gigs and recordings.  Politicians don’t do anything for art or anyone.  They don’t make things better for anybody but themselves.

But back to Ellington’s music.  “Fleurette Africain” demonstrates beautifully Mingus’ quote in the liner notes about simplicity.

“Anybody can play weird; that’s easy (and) making the simple complicated is commonplace.  What’s hard is to be as simple as Bach.  Making the simple, awesomely simple… That’s creativity.”

You’ll get it when you hear it.  Simple. Note to note. Chord to chord. Builds, weaves but always simple.  You hear every bit of it.

Same with “Backward Country Boy Blues,” with “Switch Blade,” with all of the Ellington compositions so lovingly handled here.

The wrap comes with “Rem Blues/Music” and the recitation of an Ellington poem within.

When you think what you think,