Who would have thought that some offbeat, funky musicians based in the City of Angels would save heartland American Country Music?  Really.  Pop crap slid over from rock ‘n roll and migrated to Country in recent years. Someone needed to save it.

I’m aware of the current nomenclature of Americana/Roots music but it’s inadequate.

I see the word Americana and I think of old paintings lacking perspective and stuff that got good seemingly for just getting old. Roots? That implies the early stuff in the hill country and down in the bayou.

No, no, no. What’s going on is better than just a yearning for the past.  It’s unique artists living in this world, right now, seeing it through clear eyes or at least eyes fogged by their own vision, pain and maybe substance abuse.  But it’s here. Today.

If it’s a lot like something last week or last century it’s because time rolls on but people don’t change.  Human nature’s the same. Even lonesomeness in the era of “social” media. Maybe especially now.

Little Lonely  (Release on June 25 but you can hear it online now.)

The sounds of US 40 close this album.  That’s right. The actual hum of a road and the weather, thunder sometimes. It’s a good metaphor for Little Lonely’s Little Lonely. 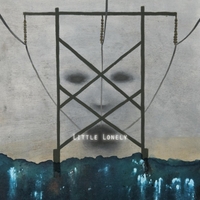 There are roads that run through the outskirts of towns you never see. There are beauty parlors where we go “to feel a whole lot better when we’re new” but we never do.

There are country carnivals that are sad behind the bright lights but it’s even sadder when they leave town.  Just like that “pointless fling” that’s passed.

There’s a strangeness “to living between point A and point B.“ Or maybe beyond points where “truth is always a railroad.”

There are songs of betrayal when he “wouldn’t dare” take her to the room you share.  “I swear she’ll never get past the top stair.”

There’s an artist here who knows what a rich metaphor “stairs” are and uses it twice. There’s a thinker who wonders if Jesus is out by the pool then “who is gonna be your God?”  Nobody?  Good luck with that.

There’s a musical sense that employs throbbing electric guitars riffs in places, soft mandolin in others and sometimes together, brassy horns, mournful pedal steel guitar, twelve-string and, in one place, an absolutely spooky organ.

There’s this unique little voice that is somehow powerful.  What can I compare it to, or whom? Do I even want to? She’s worth hearing without suggestion.  But since critics are supposed to do stuff like that: wait for just a trace of Dolly Parton at her softest, a smidgen of Cyndi Lauper.

She can sing about the “burial ground of feeling” but she hasn’t stopped feeling. She’s unsparing —  maybe when you get old you’re just “a slower version of yourself”  — but she’ll give you a smile just as quickly.  “Accidents happen, they do.” Ok, it’s dark humor but it’s funny.

Michael and the Lonesome Playboys

I wonder if Michael Ubaldini was thinking about what’s happened to country music when he wrote “end times are here, they’ve already begun” on his Texas swing number “Moondog Mad.”  He’s been quoted at saying that country music has “devolved not evolved,” but he’s “Walking Through Fire” to bring it back to where it belongs.

What kind of name is that for a country singer?  Just right, I guess, since he can move from rockabilly to bluesy to cowboy lamentations with ease.

And the lyrics: whether sad or funny, regretful or ironic, honky tonk or Dylanesque, they always get right to the heart of the matter.

“I’m better off without you, still I can’t bear to be alone.”

But “a moment without you is a moment too long.”

Still “ at least do me wrong with some style.”

Lest I become “. . . “a beggar at the gate weeping for salvation”

There are some just standout tunes.

“Sweet Ole Riddle” is one, though I doubt a song which talks about being held “by the short hairs” will get much pop country radio play.

A number of years ago Ubaldini’s star-crossed love song “Two Wrongs Like Us (Don’t Make A Right)” could have been a big hit on the country charts.  Pray to the ghost of what the Grand Ol’ Opry was that it can be again.

As with all true country greats — think Hank Williams — he knows that country and blues are separated only by a little geography and sometimes color.  His blues harmonica on “Someone Should Put You On Trial” would work on any Howlin’ Wolf record.  In fact, so would the whole song.

Now, as to real country lost love tunes, I can almost hear George Jones intoning “. . . this place don’t feel like home, only a heart full of tears.”

The playing on the album is unadorned, largely undubbed and generally superb. Gary Brandin knows just how to support the singer on pedal steel guitar. You almost feel like you’re having a shot while Michael and the band play in a small club.

As with Little Lonesome, the road plays a large role on the album. That’s very American to the core. After all,  Kerouac’s On the Road is one of the half dozen greatest American novels and moondog mad is about the best definition I’ve ever read of Dean Moriarty/Neil Cassidy, when I think of it.

The sounds of “Old US 40” closes Little Lonely’s album and “Interstate ‘5’ “ closes Michael’s. We can’t escape the road that so defines America and Americana (so I used that term, so what).

Railroads are here too, whether in Ubaldini’s “Steel Train” or in Little Lonely’s “Lament.” If it “takes a train to cry,” you know “truth is always a railroad.”  Maybe real country can join railroads in making a comeback.

One thought on “Record Rack: Little Lonely, Michael and The Lonesome Playboys”