For those curious as to what Herbie Hancock’s Headhunters would sound like in 2014 sans Herbie; legendary drummer Harvey Mason’s latest album Chameleon would be the best example of that one of a kind jazz-funk style in a slightly more contemporary setting.

Mason played drums on the original Head Hunters album in 1973 as well as their follow up album in 1975, Survival Of The Fittest. Chameleon sounds more like the latter with its more subdued R&B-Jazz funk feel. 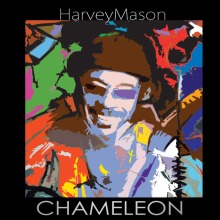 Mason has recruited some of the finest session players in jazz on the album, which was also co-produced by Concord Music Group’s Sr. Director of A&R, Chris Dunn. The opening track, “Black Frost,” features some incredible and daring tenor sax work by Kamasi Washington. “Montara” displays the fluid guitar virtuosity of Mathew Stevens, who also arranged this composition.

Vocalist Chris Turner guests on “If I Ever Lose This Heaven,” adding a soulful and contemporary R&B ambiance that blends beautifully with Jimmy Haslip’s melodic bass playing and the muted guitar lines played by Mathew Stevens. The horn arrangements performed by Corey “CK” King on trombone, and Christian Scott on trumpet are subtle and tight.

“Looking Back” is a highlight of the album, with original Headhunters bassist Paul Jackson laying down his one of a kind style which initially helped create and define this brand of fusion over 40 years ago.

“Before Dawn” and “Places And Spaces” feature tasty, fusion horn hooks by Christian Scott, Corey “CK” King, and Kamasi Washington. King’s vocals on “Places And Spaces” glide nicely atop of the laid back ballad arrangement. Kris Bowers offers up some spacey, acid jazz keys to these pieces and on the composition “Ether Way.”

But by this point, the album gets a little too steeped in a repetitive and overly mellow ‘70s retro fusion bag, demanding something more up-tempo and original sounding. This is certainly the case on “Mase’s Theme,” which sounds too much like a mix between The Headhunters, Roy Ayers, and George Duke. And that’s fine, but there really isn’t anything new and innovative at this point.

Even the title track “Chameleon,” which is a cover of a classic from the original Headhunters’ 1973 debut album, is far too relaxed and safe in comparison to the original or the 1975 live version from Herbie Hancock’s album The Flood. But it’s nice to hear original Headhunters percussionist Bill Summers adding some thoughtful and melodic flourishes and returning to the hinda hu whistle that helped make the original version so unique.

The most exciting composition is the album’s closer, “Looking Forward (Breaking Bad),” arranged by and featuring some powerful tenor sax work by Guilluame Perret.

John Beasely’s keyboard work is stellar and inventive and Paul Jackson’s bass playing sounds just as funky, tight, and bold as it did in 1973. The piece is filled with tons of fun funky hooks, twists, and turns.

Although Harvey Mason isn’t reinventing the wheel on Chameleon, he once again proves to be one the foremost groove masters in any genre of music. The band performances are slick and funky. Chameleon is a perfect tribute to The Headhunters style and all of the music inspired by the innovative group. Most of all, this is a party album, even during the extremely laid back moments. It’s apparent that all involved were having fun doing what they love.