There have been countless films made about the blues and about B.B. King. A large percentage of these films merely focus on how King (Born Riley B. King on September 16th, 1925, between Itta Bena and Indianola Mississippi) inspired a plethora of overdriven, unoriginal rock guitarists from the ‘60s and ‘70s. Very few have focused on the validity of the man’s music in its own right and the bleak conditions that helped to create the blues.

Director John Brewer has successfully captured the heart and soul of B.B. King the man and the musician in his new documentary The Life Of Riley (released in select theaters throughout the US on May 21st, VOD on June 1st, and on DVD and blue ray on June 17th.) The film is warmly narrated by fellow Mississippi native and blues lover Morgan Freeman.

Although we hear from dozens of King’s famous admirers and colleagues such as Buddy Guy, Eric Clapton, Bonnie Raitt, Carlos Santana, John Lennon, Joe Bonamassa, Paul Rodgers, Bobby “Blue” Bland, Bill Cosby, John Mayall, and Robert “Jr.” Lockwood, it’s the true and often harrowing tales of surviving life as a young black share cropper in the deep South that resonate as strongly as the sound of King digging deep into the strings of his guitar Lucille.

Brewer lets King, as well as his siblings, cousins, and distant relatives, tell a story of a life of a young man surrounded by constant labor and the reality of the most inhumane violence, hatred, cruel conditions, terror, and hell behind the forces of that labor.

There is a look of pain on King’s face as he recalls having started picking cotton from “can to can’t” (“from when you can see to when you can’t”) at the early age of seven and witnessing the Ku Klux Klan brutally castrating and torturing a young black boy to death after being accused of talking to a white woman, An image that has haunted the king of the blues his entire life.

As King recently makes his way to his original home, a tape is played of King’s late father Albert, giving directions and reminiscing about the small rural plantation in Mississippi. This is one of the most touching moments in the film. The love and sorrow is in every expression on King’s face as he looks outside of his tour bus at the familiar sites as he hears his dad guiding him back home.

King visits his late mother’s grave site. She passed away of diabetes while King was barely a teen. After that, King was forced to move from one relative’s home to another.

King talks about feeling “abandoned” after his mother’s death. It was around this time that he discovered the guitar and it’s been the driving force of his life ever since.

As each tale unfolds, we hear the music of field hollers, and Mississippi “country” blues icons Charlie Patton, Bukka White (King’s cousin) and Blind Lemon Jefferson, not to mention fantastic footage of King performing throughout his illustrious career.

Brewer takes us on the long journey from Mississippi to Memphis, where King cut his very first sides at the legendary Sun Records studio for the Bullet and Modern labels.

There’s still nothing like that very first recording of “Three O’ Clock Blues” recorded in the early ‘50s for The Bihari Brothers. At this time, King became a disc jockey for Memphis’ radio station WDIA with Rufus Thomas.

From Memphis we’re taken on the “chitlin circuit” in the ‘60s where segregation is ever present. King recalls almost being killed in Memphis the night Martin Luther King Jr. was murdered when every room in the hotel King and his band were staying in was burned down.

In the midst of broken marriages, hit records, and long tours, King never stopped working on his music. Friends and band members praise the work ethic of this great man and how he loses himself in every single note of a performance. B.B. King becomes one with the music that comes from pain but is made out of love. 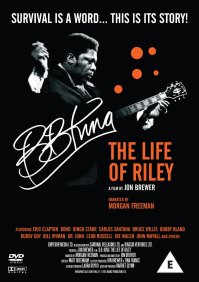 What makes The Life Of Riley better than most documentaries about the blues is that it serves as a poignant and powerful reminder of the true pain and dreadful conditions that gave birth to the real blues B.B. King plays that has almost been forgotten by younger generations of blues/rock musicians.   Today, hard times for a “blues” musician are when the balance on his/her Starbucks card gets too low for a refill.

Thank God these conditions have changed but it is clear that there are no more musicians alive today who play the honest, unfettered blues the way B.B. King still plays them.

All of the music industry stuff and talk by self- indulgent English blues plagiarists are mere fluff compared to the simple honesty of the story about love and survival portrayed in this film.

Music lovers do not miss this film.

This is the real deal.