Hollywood, CA  On Monday evening the buzz was in the air above Hollywood Boulevard. LA’s favorite sons, Van Halen, were shooting a live mini-concert in support of their new live album, Tokyo Dome Live In Concert . This show was in front of easily a thousand or so of their most connected/lucky fans and was to be aired live over two nights on the Jimmy Kimmel Show.

Within the camp of Van Halen fans, the dividing line is Van Halen with David Lee Roth or without him – meaning with Sammy Hagar, whom they hired to fill Roth’s one-of-a-kind shoes. Given the band’s gargantuan, top of the world status between about 1977 and 1985, it’s bewildering that they had never done live TV with their original lineup. But Monday they finally did it with Diamond Dave, deservedly so as his voice and antics are as much a part of the band’s legend as its sound. Monday turned out to be a classic night of band drama and the spontaneity that it can bring about.

From mid-afternoon, this gig was an exercise in patience and a testimonial to the patience, endurance, and loyalty of the true fans. I waited with a die-hard fan who had flown out, touch and go, from Baltimore about $1200 ago. To simply access the street was a matter of waiting in a series of roped-off holding-areas and waiting for the blazing sun to go down for the best lighting. 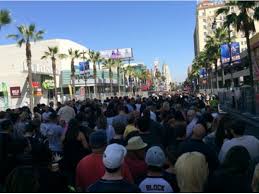 When at long last the sun went down and the band hit the stage at 7:30 everyone was pumped. Van Halen launched into “Panama” and as Roth showed us his martial arts skills with a spinning samurai mike stand…it bopped him square on his beezer less than a minute into the set. One can only imagine being a fly on the wall for the post show band meeting after this. The polarized dysfunction in the band over Roth’s antics, and Eddie’s preoccupation with the music is legendary. Hell, these guys couldn’t even make it onstage to perform together when they were inducted into the Rock and Roll Hall of Fame.

Knowing a retake was available, Roth apologized and left the stage to get his nose taped and ready for “Panama – Round 2.” This left three Van Halens on stage, Ed, his brother Alex on drums, and Ed’s son Wolfgang on bass … left them there alone to jam it out until their singer was ready again. These moments are often a magical time, in which a band must really be in the moment and make it happen unrehearsed. It can be the sort of thing that both good and bad legends grow from.

Though only the live audience saw it, Ed did do some tasty leads and effects with his vibrato arm and the rhythm section held it down super steady to give him room and space to work in. Save for the evening’s unplanned spontaneity, this is the Van Halen blueprint. The rhythm section really only gets fancy when Alex sees an opportunity and he doesn’t do it too often.

The bass, Michael Anthony’s for years and Wolfgang’s now, is there primarily to map out the musical boundaries to feature Ed. For many/most of the band’s fans, it’s all about Ed’s guitar playing (including his noodling) and waiting to hear what he will come up with next.  With his sound and technique Ed basically knocked the rock guitar world on it’s collective ass. People had to really dig in to keep up with him. So, this minute and a half or so of free reign was great to see.

After the festivities, Monday’s gig was 8 songs and one retake long. The band put out huge energy on stage, too, if not in the same fashion as, say, 1980. The athletic jumping around that Ed used to do…gone, it’s why he had hip surgery. Roth’s patented leaping kicks…not like they used to be. Alex still sounds like a well-oiled engine, though. Wolfgang is no Michael Anthony on bass or vocally but there are filters to sing through that can diminish that reality.

Fans of Van Halen still wonder why Michael Anthony was ever canned from the band. His voice was the signature Van Halen harmonies and his bass playing was simple, solid, and by now, it’s actually iconic as an example of how to tastefully showcase a hot guitar player.

In the end, the fans got what they wanted, a glimpse of Van Halen live on Hollywood Blvd, television got what it needed, footage of VH to show the world. And, Van Halen themselves showed (some of us) a living breathing example of the dynamics of show biz