In my heart of hearts, my favorite jazz festival ever has always been the one held every year on Central Avenue in the shadow of the Dunbar Hotel. It’s close to the roots of jazz in this town, it has band after swinging band, the musicians play like their lives depended on it, and the crowd is serious jazz loving people. Not college kids or rich westsiders or hipsters or tourists or even jazz critics, just people. Jazz people.

And it’s back again this weekend, both Saturday and Sunday, for the twentieth time. Not sure how many I’ve been to but enough that I keep bumping into people I remember on the street there. I’m gonna run through the acts and time and location and incredibly groovy parking set up (Secure lots! Shuttles! Free!) but if you’re already bored by my banter you can head straight through this link to the Central Avenue Jazz Festival itself and read the same thing but with less words and better graphics. 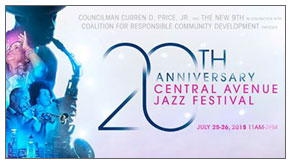 First, where is it? It takes place on Central Avenue, the epicenter for all that was glorious in west coast jazz in the thirties and forties and even into the fifties, between Vernon Avenue and Martin Luther King Boulevard. Take the 110 to the MLK exit and head east to Central Avenue. You’ll run right into it.

Parking info is linked here and it’s dreamy. A block shy of Central Avenue on Martin Luther King is Wadsworth Elementary School. It’s free, secure, plentiful and best of all there’s a regular air conditioned shuttle service to carry you the three city blocks to the Festival. It winds you through the charming neighborhood and then stops and the doors open and the sounds of pure jazz fill the bus. You are there. And there’s even another elementary school–Harmony Elementary–that is the same thing. Secure, free and only a block away from the grounds. There’s even a shuttle from there as well, though you can walk the block faster. It’s up to you and your aging knees.

Food and non-alcoholic drink galore, all of it good, some awesome. Peach cobbler to die for. The bean pie man. All that soul food your doctor warned you about. Who knows what else. Plus fruit drinks you are not allowed to pour anything stronger into by law. You read it here first.

There is lots of seating, lots and lots, but never enough. Feel free to bring your own. It is so casual and live-and-let-live no one will care. While people listen here, seriously listen, the vibe is more like the very back of the Hollywood Bowl during the Playboy Jazz Festival, but without the inflatable furniture. Or spliffs. Or smooth jazz.

Because there will be no smooth jazz at the Central Avenue Festival. None that I can see on the schedule this year. Evil types had forced some bogus stuff on the bill the last couple years but from the looks of the schedule this year, all those evil types have been purged. There is not an act this year that is not 100% the real thing. If I am wrong, I will eat my hat, and it’s a big hat.

There are two stages, one at either end, and acts will be appearing in shaded comfort in the lobby of the Dunbar Hotel as well. One stage has more of the main acts, the other more of the newer acts. That varies a bit but that is the gist. Let’s look at the line up on Saturday:

11:45 am   LAUSD Beyond The Bell All-City Jazz Big Band–the newest jazz generation cooks.
1:00 pm  Henry Franklin: The Skipper and Crew–They call him Skipper (dig the hat) and he has a kicking quintet that wails in a mid-period kind of John Coltrane way. This crowd brings out the best in them.
2:30 pm Alfredo Rodriguez Trio A phenomenal young pianist from Cuba (if I remember right), he puts on a ferocious show of virtuosity and energy and is a blast to watch. Nice guy, and another of Quincy Jones’ discoveries, and lets hope Quincy is there to dig the scene as well.

4:00 pm Gerald Wilson Orchestra—We just lost Gerald who would be a ninety-something dervish in front of the most exciting big band on the planet, and between tunes he’d regale the crowd of his days living at the Dunbar hotel seven decades ago and playing at the Club Alabam just next door. It never got more magical than that for me. His extraordinarily talented son Anthony Wilson is leading the band now, and the talent on stage are all superstars, even if the jazz world isn’t yet aware of it. Kamasi Washington–a genuine star–should be there too, just erupting in molten tenor flight the likes of which you have not heard in a long time. (And then he’s over at California Plaza the same night!)

5:30 pm And Poncho Sanchez takes us out, and my guess is he’ll really be working the Stax soul and bugulu as well as his signature Latin jazz sound. Groovin’ to say the least.
And that’s only one stage, there’s another:

There’s three great sounding saxophonists in a row here. I’ve written about the astonishing talent of Glendale’s own Christopher Astoquilca, and caught Aaron Shaw and Braxton Cook on YouTube. All three are highly recommended so tear yourself away from the main stage for a spell and check some of each. I love how the Festival is booking these brand new jazz artists like this. And the crowd pleasing teenaged bluesman Ray Goran plays some searing guitar to finish out the day on the second stage.

And then inside The Dunbar Hotel there are two acts, both featuring community programs nurturing the youngest jazz player:

2:00 pm Beyond the Bell Combo (LAUSD jazz with I believe Ndugu Chancler directing)
OK, that was all just Saturday. Sunday is just as brilliant:

12:45 pm  Barbara Morrison The indomitable singer–one of LA’s best ever–will lord it over the stage and owning every song she performs, no matter who did it first. Essential viewing.

2:15 pm John Beasley & MONK ‘estra It’s hard to say too much about how great this band is. It’s pure John Beasley, in that’s he’s taken all the Monk compositions, rendered them new without reducing their Monkishness one iota, and the result is thrilling. State of the art jazz that never gets bogged down by art…this is maybe the best new big band on the planet. Not that I’ve heard every new big band on the planet, but I’d be shocked as hell to hear anything better than Beasley’s mad contraption. Basically, ya gotta be there.

3:40 pm Arturo O’Farrill Quintet The son of NYC latin jazz legend Chico O’Farrill, he had been leading an orchestra doing his pop’s arrangement. Can’t wait to see what this five piece will do.

5:10 pm  Kenny Burrell Big Band You’ve heard of this absolutely legendary jazz guitar player (who, if I remember right, was Duke Ellington’s favorite guitarist). This band recently did a wildly successful show at the John Anson Ford and here he is repeating that success. As you might have guessed, when an icon is leading a band, the ranks are filled with incredible players. What a way to finish he weekend on the main stage.
Of course, there’s a whole other stage:

12:00 pm Saxist Tony White Quintet. Apparently this outfit cooks. Old pals of mine Gary Fukushima (on piano) and Mike Alvidrez (bass) are in the ranks so I will be down there taking notes and making them nervous.

2:50 pm I’ve seen violinist Dayren Santamaria steal the show at a couple Mongorama gigs and here she is with her own band  Made In Cuba. Can’t imagine this being less than great.

4:20 pm Trombonist Ryan Porter and his group shook the festival to the foundations last year.You’ve seen him with Kamasi Washington, and Kamasi and much the same crew should be back for this one, grooving massively.

And then inside The Dunbar Hotel on Sunday:

2:00 p  A Place Called Home group back one more time.
OK….be there. Hell, it’s free, the parking is there, there’s a freaking shuttle, and the jazz should be absolutely wonderful. Get off the couch and go. OK, gotta run, I’m late for a klezmer gig. (I am, seriously.)

See ya down there people. It’ll be good to see so many of you again….
Brick