Ken Bruen’s newest installment in the Jack Taylor series, Green Hell, arrived in that neat little Amazon box a couple days ago and I’m about halfway through it. I could have finished it by now because his writing enters the eyes and brain as easily as breath enters the lungs. But I don’t want to. Bruen’s books are all jewels that sparkle and reflect light in surprising ways.
As Jack might say of his favorite writers, I want to savor it as I have the previous 10 books in the series. If you haven’t read of tortured, battered, Jack drinking his way around Galway while violently seeking justice and goodness, usually unsuccessfully, then you have reason to believe. Start with The Guards and read them all in succession. I envy the uninitiated so much that I almost didn’t provide that recommendation. “Fuck knows,” as Jack would say, I am bitter you might still have that opportunity.

Bruen writes with such sparseness, such economy — not a wasted phrase or pointless digression. No filler, no distractions, no meanderings. Cuts like a knife so sharp that you’d order coffee, tea for Jack, before you realized you were bleeding.

It’s no accident, I think, that the counterpoint character to Taylor in Green Hell has come to Ireland to complete his dissertation on Samuel Beckett. Bruen is the street level cousin of Beckett, not one more word than required, no ornate, decorative phrases or punctuation. Hemingway’s part of the same family.

The only additional step Bruen could take toward minimalism would be to stop using quotation marks like the endlessly wordy Joyce did. No accident there, either, that Beckett assisted Joyce’s efforts to finish Finnegan’s Wake, though Beckett bridled at being referred to as Joyce’s secretary.

But I digress. Back to Bruen. At one point he taught English in Africa. To have taught the language to non-English speaking people Bruen must clearly have known his stuff, such as now obscure aspects of the language as the difference between a gerund and a gerundive. (Look it up if you care. I had to as memory fades from those figures of speech you use even when the reason is forgotten.)

Thanks Miss Cunningham and all those marvelous eighth grade English teachers. To push the language, to shake its foundations, to violate its rules, to write so sparse that you don’t even need complete sentences, you have to have known what the rules are. If not, it’s just babble.

All that dissonance and melodic twists Thelonious Monk brought us were possible because he understood melody, notes, scales. He bent the instrument, the form, in new ways because he completely grasped the old ways. And Monk knew silences are as important as notes.

The silences in Bruen’s writing are to let you breathe.
————————————–
The other centerpiece of my summer reading this year has been Erik Larson’s Dead Wake, The Last Crossing of the Lusitania.

Like Larson before his exhaustive research, I have carried the notion through my adult life that the German U boat sinking of the Lusitania — killing about 1200 of the 2000 passengers and crew aboard including 120 Americans — took the United States into World War I. In actuality, the Lusitania was sunk in 1915 and the USA didn’t enter the war until 1917 when the cumulative effect of German submarine warfare, which damn near won the war, finally exhausted the bumbling Wilson’s patience.

Wilson was overseeing a recession damn near as bad as the Great Depression, damn little generally known about that as well, while playing golf daily during his adolescent-like pursuit of a second wife. 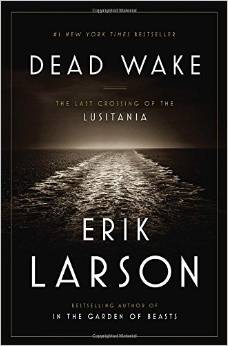 As with World War II, England led by that S O B Churchill, was trying to draw the United States into the war. Though English intelligence knew that a particular sub was sinking ships directly in the path of the Lusitania the Brits sent no naval vessels to escort the world’s most luxurious ocean liner through the most dangerous waters. They didn’t even give the Lusitania’s captain, William Turner, adequate warnings. Some in English “intelligence” services were nearly giddy that the ship’s sinking might get the States fighting with them in a war with no real reason for being.

True to governments everywhere and at all times, the English Admiralty, again led by Churchill, did everything it could to blame Turner for the sinking. Even after a very serious hearings officer exonerated Captain Turner, Churchill authored a book that included the false accusation. Every time I try to avoid the many conspiracy theorists there are about everything, I run into an historical example that it happens again and again. Lies upon lies until they become twisted truths. Rulers seeking their ends by whatever means. Conspiracies most foul. Governments simply can’t be trusted, any time anywhere.

Human hubris just as bad. A mere three years after the sinking of the unsinkable Titanic in 1912, the “world” didn’t believe any nation would sink the world’s new finest ocean liner. Even if it was carrying war materiel to England and even though the Germans, in fairness to its military high command, had run ads in American newspapers prior to the last embarkation of the Lusitania that said it would be subject to naval attack.

Larson, as he did previously in the marvelous In the Garden of Beasts about the United States ambassador to Nazi Germany trying in vain to get his government to recognize The Beast at the doorway to World War II, brings the enormous tragedy of the Lusitania down to families and individuals about to be plunged into the hell of a sinking ship. Children playing games on the deck, light flirtations at lunch, sumptuous menus in first class all blasted by a torpedo that many passengers saw streaking through the water.

Imagine that, you see it coming. You see it coming but you can hardly believe your eyes. Then it hits. Two explosions, no one is sure what the second one was caused by, then you are reassured by the ship’s officers that the Lusitania can’t sink. Then it promptly sinks and you are thrown into the water with the dead and dying all around you. Imagine a drowned baby floating by you. Imagine trying to find your second child who’s below deck while you try to figure out how to save the one with you.

War of course comes down to countless deaths upon deaths but quoting how many died at the Somme or the Ardennes Forest is just numbers. Larson lets you see that it is people, always people whose hopes and dreams and cares are simply washed away as if they’d never been.

My fear is that the children of the twenty-first century will never learn, because it’s not taught adequately in schools, that the twentieth century from which their parents sprang was one of strife and conflict previously unequalled in the world. And that the “heroes” of the time from Churchill to Wilson to even Roosevelt have damn near as much to answer for as Hitler and Hirohito. Will kids growing up today even learn who they were?

If not, terrible peril awaits. And even if they do.