In the wake of the pre-Christmas horror in Connecticut that I shall not name, I needed to be reassured that all beauty has not left the world.  Wonderfully, shortly after the holiday the pre-release copy of Bloom arrived.  Music to sooth the savage beast that so often afflicts the modern world and all the world in any era.

Beams of light shimmer and shine while notes take flight.

The playing of each instrument is accomplished in its own right but connected to all the others.  The very definition of ensemble as the opening title song remarkably demonstrates.  The two solos on the title track “Bloom” — John Bailey’s trumpet and Jason Rigby’s tenor saxophone — are marvelously enhanced by the full orchestra’s work under them, intermingled with them, a part of them.

On “Electric Images” there’s a place where the horns come up like a sunrise and then dissolve like butterflies leaving. I swear you’ll hold your breath for an instant.

Dave Ambrosio’s bass playing is but one strength among so many, as is Mike Ecroth’s Rhodes piano playing.  A Rhodes is a kind of electric piano that has gone in an out of style since its invention in the 1950s.  (I know because I looked it up.)

My personal favorite piece is “Bumblebee Garden,” which Asuka says she was inspired to write while sitting in a coneflower garden with a cat, watching bumblebees at their eternal work. Matt MacDonald’s solo shows what a fluid instrument the trombone can be when played by a master.

His singular bee is joined by the other horns to tell us we are near the hive. Sara Serpa’s queen bee calls to them without words, only beautifully sung notes. And a glorious summer day fades to sunset.

“Open Opened” is interpreted from a Japanese children’s song.  Asuka’s childhood was spent near Osaka before she headed to the USA as a very young woman in her pursuit of jazz and the sound of a big band.

Universality used to be a treasured quality in literature, music, art.  Maybe not any more, but it should be, especially as musical forms from around the world bounce off each other and, more importantly, intermingle, even mate.

Kenny Berger’s baritone saxophone in “Open Opened” rises up from the traditional tune and greets the listener like a warm embrace from a five year old.  All caring, all sincerity.

Once again I am struck by the orchestra’s unerring support for each solo. Credit Asuka’s compositions and arrangements for much of that.  And her conducting.  A classical music background surely grounds her creativity.

In “Dragonfly’s Glasses,” Asuka manages to stay in touch with a child’s feelings and sensations and give them to the rest of us, whatever we may have forgotten or lost. That is very special and is often the gift grandchildren provide. 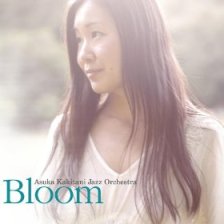 Finally, I am pre-disposed to like Asuka and her terrific big band because she likes Hemingway. She seems to know instinctively that his bravado in the face of a raging sea or revolutions in Spain was balanced by the depth of feeling demonstrated in the heart wrenching close of “A Farewell to Arms” and a letter Ernest wrote to friends to try to console them after the death of a child.

Hemingway was many things besides the finest American writer of his or any other time to date but he was that most of all. Time will tell, but Asuka may well be the finest big band composer and conductor of our time.  Thanks to her and her big band for helping us discover that Size Matters. Sometimes.