A cursed sea captain doomed to sail the world without rest, an ill-fated Norwegian girl lost in her obsessive desire to become his means of salvation.  Add to this already explosive mix a father willing to sell his daughter for the captain’s riches and a faithful hunter trying desperately to hold on to his deluded love, and you have a fantastic scenario of German Romanticism, as potent as Goethe’s Faust or one of E.T.A. Hoffmann’s macabre tales.  With Richard Wagner’s deeply melodic and moving score, evoking the watery wanderings of a soul in torment, one would think little more is needed for a successful production than a top-tier orchestra, great Wagnerian voices, and a gorgeous set.  Much of this was accomplished on Saturday evening when Los Angeles Opera’s The Flying Dutchman opened at the Dorothy Chandler Pavilion in a shared production with The Lyric Opera of Chicago and The San Francisco Opera.

The Los Angeles Opera Orchestra, conducted by Maestro James Conlon with his usual sensitivity and intelligence, beautifully conveyed the drama’s sublime immersion in music.  From the overture, which contains all the leitmotifs and embodies the entire score, to the final, closing chords, the orchestra delivered the turbulence and subtle shadings of Wagner’s music.

The drama unfolded within Raimund Bauer’s effective minimalist set, which conjured the inner workings of a ship.  Unfortunately, here is where the confusion set in.  The production, conceived by Nikolaus Lehnhoff, created a conflicting array of dramatic and visual allusions.  Inventive though they were, the costumes of Andrea Schmidt-Futterer did little to advance the narrative – more often they confused and impeded the drama.  Were the sailors of Act I samurai astronauts from the future?  Was Captain Daland, with hair like a hedgerow and round spectacles, a comic book mutant from outer space?  And the Dutchman?  He appeared out of the mists like Nosferatu in a German Expressionist film.

The dramatic tension in “Dutchman” has a lot to do with the juxtaposition of the real and the unreal, the material and immaterial, the rational and irrational: Erik, the hunter, Mary, the nurse who raised Senta, and Captain Daland with his greed for gold, represent the rational, material world.  Their costumes should be rooted in their characters.  The Dutchman, his ghostly crew, and Senta represent the metaphysical and uncanny. When the distinctions blurred, the audience, unable to evaluate the nature of the characters, was lost in confusion.

Even with his unfortunate costume and make-up, James Creswell as Daland sang with a sumptuous tone and effortless grace.  As directed by Daniel Dooner, he played the greedy Sea Captain with an odd comic touch, subverting the tragedy of a father who, unthinking, offers his daughter for a pot of gold.  Matthew Plenk, the Steersman, rendered his very human song of Act I, with warmth and nuance. Tómas Tómasson, as the satanically cursed Dutchman, arrived on shore with a steely dignity.  Tentative at first, his voice seemed to grow and blossom as the evening wore on, particularly in his duets with Daland and Senta.

The surprise of the evening was the last minute appearance of Los Angeles native Julie Makarov, substituting for an ailing Elisabete Matos. Fortunately for the audience, she flooded the hall with her powerful soprano.  After the joyful spinning song of Act II, adroitly performed by the women’s chorus, garishly dressed in what looked like steel hoops over black taffeta, and grooming themselves like a pack of flying monkeys from “The Wizard of Oz,” Senta sang her ballad.  With its howls and halloings, the song delivers us more forcibly into the drama and Senta’s obsession with the Dutchman.  No neurotic schoolgirl, Makarov’s Senta is a woman accepting her fate – to break Satan’s curse and conduct the Dutchman to everlasting peace.  Also of note, Ronnita Nicole Miller’s portrayal of Mary, Senta’s nurse, beautifully sung and well acted.  More problematic was Corey Bix in the role of Erik.  Stiff and plodding, both in voice and mien, one wished he had delivered a more lyrical rendition of Erik’s plight and pain.

Throughout the acts a scrim was lowered at the front of the stage, unfortunately distancing us from the action.  If used sparingly it could have been effective, as in Act II when it displayed the Dutchman’s massive silhouette.  While Senta stared, hypnotized by his portrait, we saw her gazing upward, as the shadow hung over her, a constant reminder of his mythic presence in her life both past, present, and future.

Act III was rife with visual confusion.  Sailors who looked more dead than alive swarmed the stage.  It was difficult to keep in mind that they were the living crew of Daland’s ship, not the ghostly riders of the Dutchman’s vessel.  Their taunting song was robustly performed, however, driving us towards the disembodied answer of the Phantom Song by the Dutchman’s crew and propelling us towards the awaited end: the Dutchman’s departure and Senta’s self-sacrifice.

Yet, in spite of the mixed metaphors and failed symbolism, this “Dutchman” lingers in the mind.  At two hours and twenty minutes and without intermissions, the curious production entertained, leaving an appreciative audience in its wake. 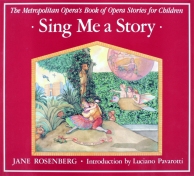