Simulating the movements of a medium at a Ouija board, a woman presides over the destiny of two male dancers who lie prostrate on the stage before her.  Slamming her hands on an electronically amplified desk, she calls them to life like a malevolent puppet master waking her creations.  Or is it a manic game of Simon Says, in which two playmates obey the call of a sadistic Simon?  References abound in the unique dance universe of choreographer Wim Vandekeybus. 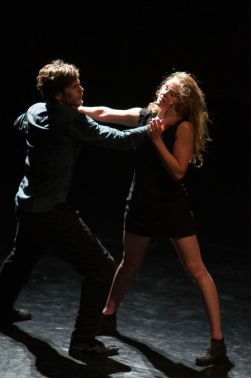 Throughout the ninety minutes of What the Body Does Not Remember in a CAP UCLA concert at Royce Hall this weekend, bodies leapt through space only to land perilously close to others lying prone on the floor.  Blocks were stacked, mounted, climbed, and flung in the air, caught with razor sharp timing.  In a push pull of attraction and repulsion, men and women came together, exploring each other like angry monkeys.  All these acrobatics were danced to delirious effect by the members of Ultima Vez, a Belgian based troop, accompanied by an intensely percussive soundtrack by Thierry De Mey and Peter Vermeersch.

Though dangerous games were afoot, the piece was not without humor.  Much has been written about the violence of Wim Vandekeybus’ choreography in this seminal work, debuted in 1987 and now on a world tour; but there is just enough levity to offer relief.  A line of dancers moved purposely back and forth – disrobing, trading jackets, preening, pickpocketing, wrapping themselves in bright-colored beach towels, mopping the floor, and cavorting amiably. 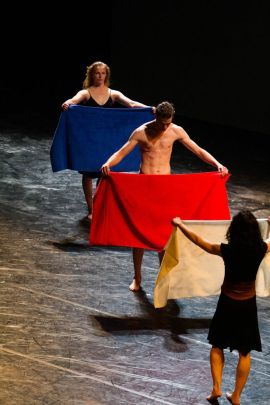 It was a parade of souls on an urban treadmill – a very human comedy.  In a sequence worthy of Bill Irwin, three dancers, using their bodies and breath, kept three white feathers aloft.  And in a tableau of posing figures, a lone dancer, like a errant child, refused to join in, content to be left to his own devices, and distracting the group from its intentions.  Though tenderness was in short supply, there was a sweet, Chaplinesque moment when a woman clung to her partner, sitting on his lap like a sleepy child or a devoted lover, as he tried to wrestle off his sweater without disturbing her.

Though the dance/drama ended as violently as it began, there was something satisfying about coming full circle.  Always original, without cliché, Vandekeybus’ work succeeded, with one exception:  the sequences were overly long.  A bit of editing and the work would soar, avoiding the tedium of too much repetition and focusing with precision on the ferocious beauty of the stomping, spinning, tumbling, colliding choreography and Ultima Vez’s brave, talented dancers. 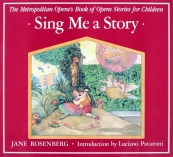